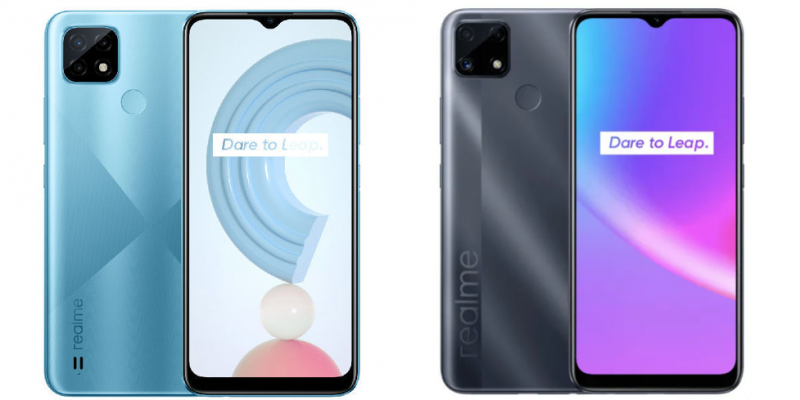 Realme C20, C21 and C25 were launched on Thursday in India. All the three Realme C- series were launched in different other countries much earlier this year. They all come with a display notch of water drop-style. This feature makes them different from each other, while the Realme C20 series consists of a single rear camera but the Realme C21 and C25 has triple rear cameras. The battery of Realme C25 is of 6,000mAh and it also offers a superior package when compared to Realme C20 and C21, which both of them have 5,000 mAH battery.

When availability is concerned, the Realme C20 will be on sale on April 13, from 12pm on the other hand, the Realme C21 and C25 are made available in the market from 14th April and 16th April respectively. All of the C series will be available for purchase through Realme.com, Flipkart and different other retail stores.

Realme C20– This phone is of the dual-SIM and has the ability to run on Android 10 along with Realme UI on the top. It features an IPS display of a 6.5- inch HD+ with an aspect ratio of 20:9. The power of the phone comes from the octa-core MediaTek Helio G35 SoC along with RAM of 2GB of LPDDR4x. When photos and videos are concerned, there is one 8-megapixel sensor camera at the backside with a lens of f/2.0 along with LED flash. At the front side of the phone the camera comes with a 5-megapixel sensor with lens of f/2.2. The connectivity options of the Realme C20 phone includes Wi-Fi 802.11 b/g/n, 4G LTE, GPS/ A-GPS, Bluetooth v5.0, Micro-USB, and a 3.5mm headphone jack.

The internal storage of Realme C21 is 32GB and 64GB whereas both are expandable with the help of microSD card along with a dedicated slot. The connectivity options that are included in the phone are Bluetooth v5.0, GPS/ A-GPS, 4G LTE, Micro-USB, Wi-Fi 802.11 b/g/n, and a 3.5mm headphone jack. Sensors on the board include ambient light, accelerometer, a proximity sensor and magnetometer. Users will also find a sensor of a rear-mounted fingerprint.

Realme C25- It runs on the Android 11 along with Realme UI 2.0  on the top. It features a display of 6.5 -inch HD+ (720×1,600 pixels) along with an aspect ratio of 20:9. The phone is also powered by octa-core MediaTek Helio G70 SoC along with RAM of 4GB of LPDDR4x. This phone has a setup of a triple rear camera which comprises a 48-megapixel sensor along with f/1.8 lens, monochrome sensor of 2- megapixel with lens of f/2.4 and macro shooter of 2-megapixel. Users will also get a selfie camera of 8-megapixel at the front side with lens of f/2.0. The storage of C25 has both 64GB and 128GB versions and both of them are supported by expansions with microSD card. The connectivity options are Wi-FI 802.11ac, 4G LTE, Bluetooth v5.0, Micro-USB, GPS/ A-GPS, and a 3.5mm headphone jack.