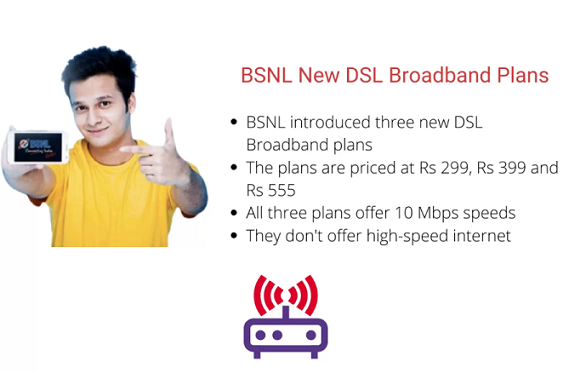 BSNL also known as Bharat Sanchar Nigam Limited had introduced three plans for the new DSL broadband according to the reports. The three plans include Rs. 299, Rs. 399 at the same time Rs. 555. All the three plans come with the speed of 1the0 Mbps. All these three plans will be rolled from 1st of March 2021. As there are lots of DSL broadband plans, they have a tendency to offer much slower speeds when they are compared to Bharat Fiber Plans from BSNL.  The DSL broadband plans have the FUP limits that comes with 100GB, 200GB and 500GB. After all these limits the users will be able to browse the Web but they are having much lower speeds.

According to the TelecomTalk reports, the broadband plans of Rs. 299 from Bharat Sanchar Nigam is the 100GB CUL and according to its name this plan offers a high speed of 100GB data at 10Mbps. In case someone exhausts the 100GB data, immediately the speed will be dropping down to 2Mbps. According to the report, it states that this plan will only be available for about six months. Further the users need to migrate to the Rs. 399 plan. This is available in all the circles except some parts of India such as the Andaman and Nicobar Islands.

Dubbed 200GB Cul is the new plan which is offered at Rs. 399 and also has a very good speed data.. It has the facility of the 10Mbps and the limit of the FUP is reached, the speed will be 2Mbps accordingly. And most importantly the new DSL broadband plan of Rs. 555 will come with 500GB data and the speed will also be the same of 10 Mbps which will again drop down to 2Mbps when the limit is being reached.

Benefits of the three plans by BSNL

There are many benefits of calling of all these three plans. A security deposit of Rs. 500 will be paid by the users for the plan that costs Rs. 299 and Rs. 399. According to the reports the DSL broadband plans of Rs. 299 and Rs. 399 will be available to all the new as well as the existing users. In addition to that, BSNL will also give the opportunity by offering some of the plans of BSNL for certain months such as 5.5 months, 10.5 months, 20.5 and 30.5 months. According to the earlier reports, all these plans will be live from 1st March.

What are the new expected Whatsapp features of to be launched in the year 2021?