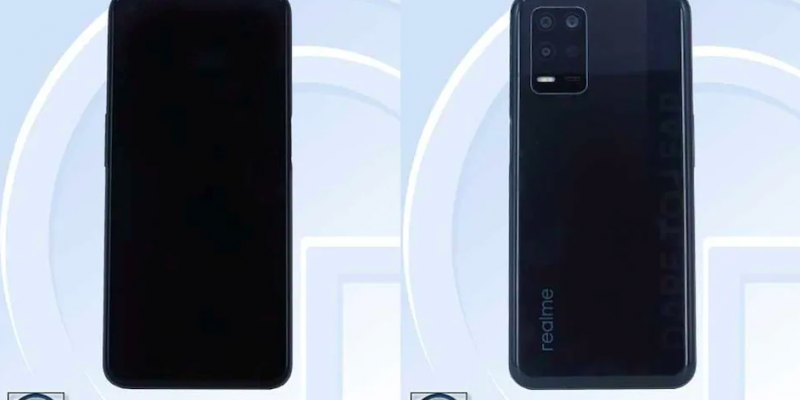 TENAA listing included the model number RMX3161 of a Realme smart phone which is doubted to be the Realme Narzo 30 pro. The listing published the important specifications of the phone beside its images.  The launch of Realme Narzo 30 series in India has been recently talked about by Realme. Last year September saw the launch of the series which is the next in line to Realme Narzo 20. It is contemplated to make its introduction in this country very soon.

The images of the Realme phone which is suspected to be Realme Narzo 30 pro has been leaked from the TENAA listing. A punch hole at the top left edge of the screen as an advanced sulfide camera and a triple camera setup at the back have been concluded from the images.  It also suggested a side mounted fingerprint reader. It has a power button inserted with a physical fingerprint sensor on the right whereas the volume managing button on the left.  The back of the phone is flashy and decorated with the Realme tagline ‘dare to leap’ to promote Realme branding.

An LED flash light situated at the bottom of the model with an additional sensor in the setup. The Realme Narzo 30 pro according to the TENAA certificate is said to carry a rectangular camera setup at the back with three sensors. The front camera setup carries four cameras as showed in the leaked images.  In spite of its larger battery from its previous version, the debut model has slimmed down from 9.4mm to 8.8mm. This thinning up of the phone drops down few grams of weight as well although the camera setup looks much heavier and wider than the previous version.

Its further features include a measurement of 162.5×74.8×8.8mm, LCD screen of 6.5 inch, duel SIM connectivity, supports 5g connectivity and runs on android 11, a battery of 4880mAh.  The phone is reported to be available in black color; however other colors may be availed with its launch.  More updates are yet to be received as the dates for its launch approach gradually.  According to Madhav Seth, the CEO of Realme, most of the phones will be 5G enables which are launching in 2021. It is also reported to support NRSA/NSA network which will make the Narzo series the first one to have the next-gen network connectivity.

The certain date for the launch has not yet been declared but it is anticipated to be launched in May or before that. Earlier in a survey conducted by Realme, six options were presented to the fans asking their preference on the style and branding of the retail box.

Apple is expected to launch its new MacBook Pro 2021